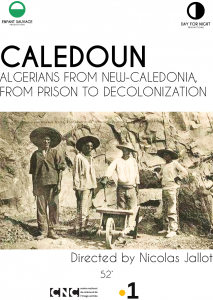 Our intention is to tell a «Franco-Algerian» story of New Caledonia; colonial history through a new angle, a little-known aspect of New Caledonia, its «Arabs», more commonly called Caledoun, such is the name given to their land of exile the Arab and Berber convicts deported to New Caledonia.

Political or ordinary prisoners, tens of thousands are sent to this prison of the antipodes (between 1863 and 1931), often without hope of return. Many die during the journey or during their detention. Some, however, make their home in concessions granted to them by the State. And now these colonized North Africans are more or less unwilling to serve the interests of their executioners against other colonized, the Kanaks, from whom they take their place on plundered lands. Tragic irony of history.